The bee, with its black and gold stripes, translucent wings, and trademark fuzzy body, is an iconic sight in woodlands and gardens all over the U.K.

In the UK since 1900, 13 bee species have become extinct and a further 35 are on the threatened species list

With that in mind, do you realise how significant this creature is to our environment as well as the threats it faces?

The world without bees is looking increasingly probable with each passing year.

If bees ceased to exist from our planet, important parts of our ecosystem would struggle.

This article will explore the importance of bees and what you can do to help save them. 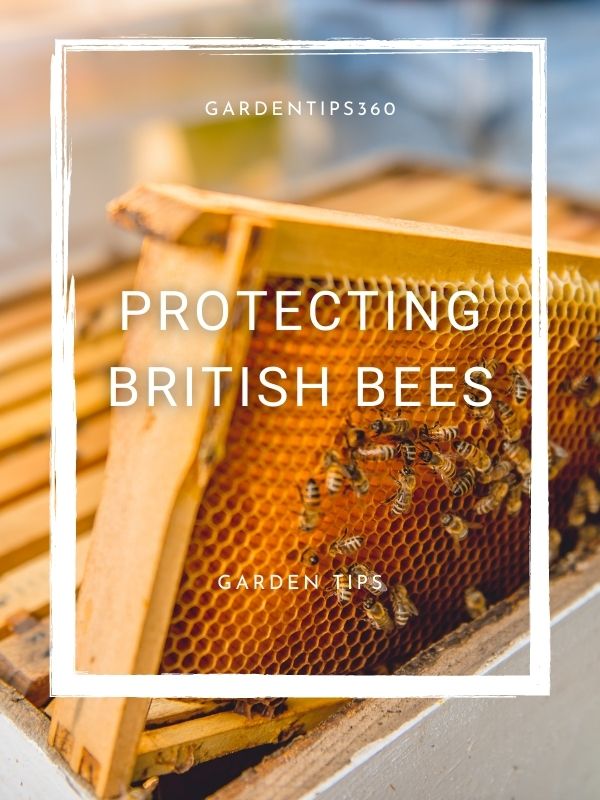 We're an affiliate We hope you love the products we recommend here at gardentips360! Just so you know, we may collect a share of sales or other compensation from the links on this page, in other words, we will earn a small commission at no extra cost to you! Thank you if you use our links, we really appreciate it!

Why are bees important?

Bees are much more than the fuzzy flying insects we see flitting among the blooms during the warmer months. Bees are vital to both pollinating our food along with a large number of trees and flowers that provide habitats for wildlife.

Bees of all shapes and sizes (and species) are the perfect pollinators. They’ve been around for over 40 million years, so it is fair to say they know what they’re doing when it comes to pollinating. When a honey bee lands on a flower, its hairy body helps pollen stick by trapping grains between its hairs. It then transports this pollen back to the hive where other bees use it for making honey or brood food for its larvae – rather clever, if you think about it!

Around 80% of all blooming plants, according to the Food and Agriculture Organisation of the United Nations, are specialised for pollination by animals, particularly insects (which includes bees). Many of our vegetables, fruits, and livestock feeds on vegetable fertilization such as broccoli, asparagus, and cucumber which require pollination.

Wild bees are among the most important pollinators because they can pollinate on a much larger scale in comparison to any other species you find in the U.K. Other types of pollination include, but aren’t limited to, wind, birds, bats, and other insects.

It’s been reported that farmers collectively in the United Kingdom would have to spend £1.8 billion each year manually pollinating their crops without the help of bees, which would mean the price of food would rise drastically. 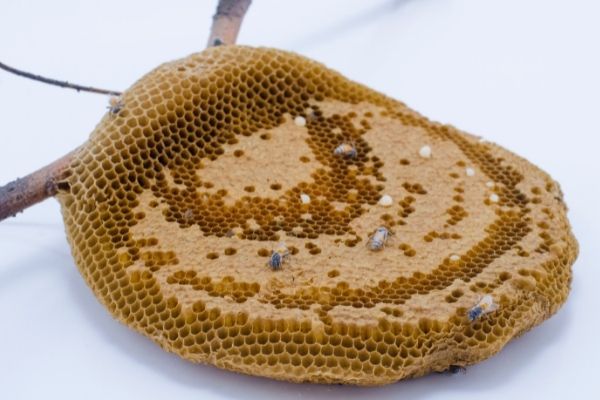 Why honey is important

Honey is a deliciously sweet, thick liquid that bees secrete from glands in their abdomen. Bees collect nectar and pollen from plants and trees before processing them into honey – which is how they get the energy to produce more and more.

The nutritional value of each hive varies depending on what flowers are blooming at that time… around 70 lbs per year for some colonies! Honey can be used as an essential ingredient in many recipes and can even be just enjoyed on its own. Did you know? A bee will visit about 1500 flowers during one collection trip!

Different types of british honey - to name a few

This beige, creamy, thick honey is produced without the use of a specific plant. It’s simply prepared in a different way than normal honey. This honey’s consistency is rather liquid, making it ideal for topping toast or using in baking. 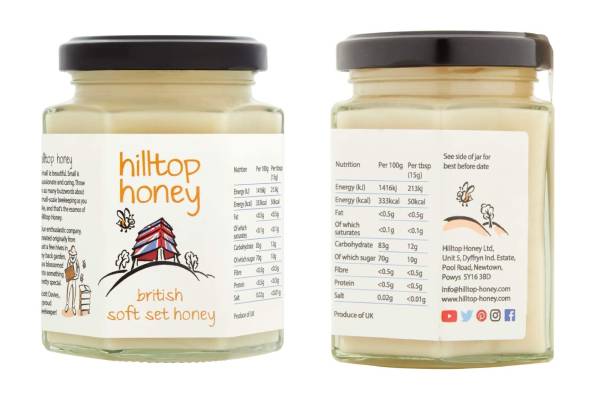 This type of honey comes from bees who collect nectar and pollen from a variety of different types of flowers. As the bee gathers this pollen, it mixes together to create one sugary substance that is then turned into delicious wildflower honey! 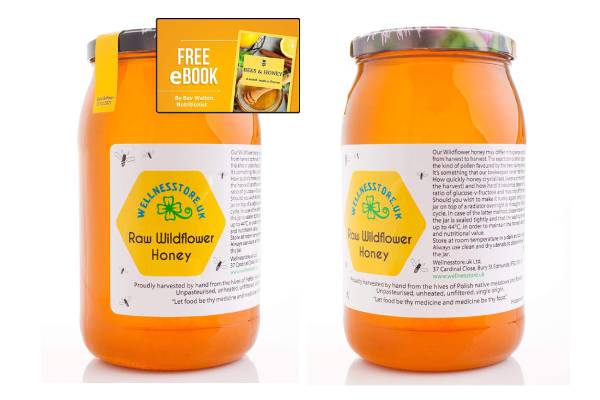 This is produced when bees are in the area of fruit trees that have blossoms. The honey created by these plants tends to taste more fruity than other types due to the pollen gathered from flowers, which gives it a unique flavour. This type of honey can also be used as an alternative sweetener for those with diabetes because it doesn’t cause any fluctuations in blood sugar levels.

This type of honey is produced from bees who gather nectar and pollen from the sap of trees such as birch, coniferous (pine), beech, spruce or linden. It tends to have a clear colour with a higher sugar content than other types which means it’s great for baking. This type can also help treat sore throats because we produce an enzyme in our saliva called glucose oxidase that helps kill bacteria when we eat honeydew honey. 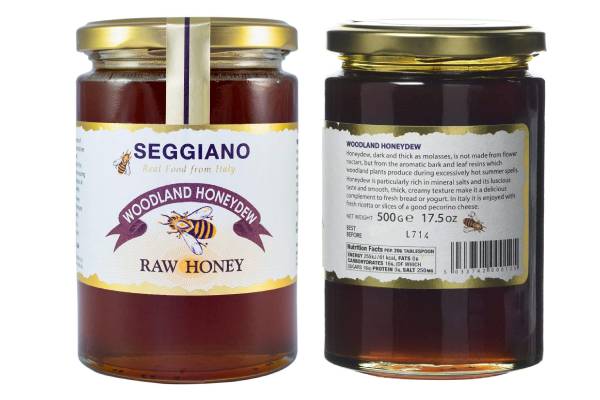 Why are bees disappearing?

Solitary bees are one of the few insects that humans actively try to protect, but even this is not enough. There are several factors that contribute to how fast bee populations dwindle each year; some natural and others caused by human activity. Saving bees is linked with saving trees since many of the hazards to bees are similar to those faced by trees and woodland. We may be looking at a future without bees if these issues aren’t addressed.

Many of the areas bees formerly inhabited no longer exist owing to an increase in urban construction and invasive farming techniques. These new technologies are as harmful to bees as they are to trees and woodland in the wild.

Several species of bees nest in hollow trees in the wild, so when trees are destroyed, their homes follow. Managed meadows and other areas rich in blooming flowers are also on the decline, suggesting that bees have lost a critical food source. 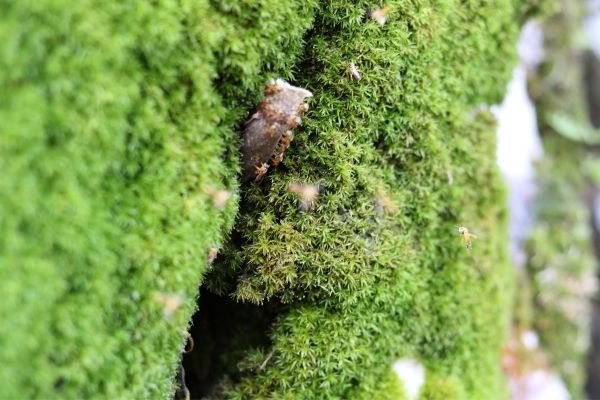 We have all heard of the dangers pesticides pose to our health, but they also affect bees. Pesticides are often sprayed onto plants and trees in order to kill pollinating insects that eat them.

Unfortunately for us, these poisons not only target specific pests at the time; many chemicals used in pesticide sprays remain active after application which can severely harm any insect that comes into contact with it – including pollinating bees.

Neonicotinoids, in particular, have a detrimental effect on bees since they are absorbed when sprayed onto crops. When a solitary bee visits that plant to pollinate it, the pesticide in the flower will be absorbed into its body. This can have a serious effect on a bee’s central nervous system.

The effects of climate change are already being felt, and bees may be one of the first species to suffer. According to a report by researchers at Harvard University, there is evidence that bee populations decrease significantly in hotter places because they need water for cooling purposes.

As summers become longer and more frequent due to an increase in temperatures across Europe, it follows that honey bees will have less time between seasons during which they can build up the energy necessary for reproduction. 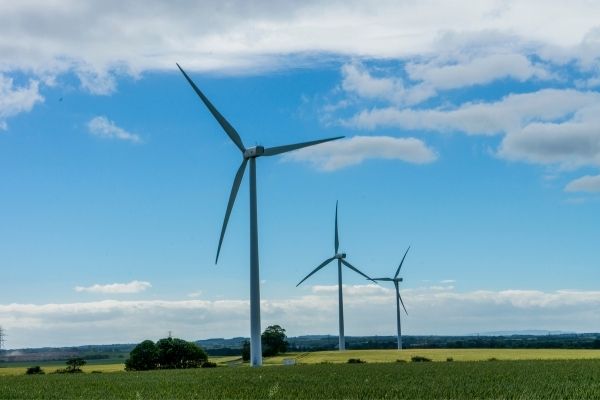 Bees are not just threatened by external forces, but also from within. There are many parasites that can cause huge problems for bee colonies including the varroa mite and the honeybee tracheal mite. When bees become weakened or ill because of these factors they often can’t recover.

Non-native creatures might also be a danger to female worker bees. The Asian hornet, Vespa velutina nigrithorax, is one species that devours honey bees and poses a significant risk to native species. Unfortunately, The Asian Hornet population in the U.K. has reached record highs over the last 5 years.

1. We Are Losing Species

Over the last century, the United Kingdom has lost 13 bee species and 35 others are considered threatened with extinction. None are protected by legislation. Almost 1 in 10 wild bee species will go extinct in Europe.

Choose blooms with pollen that bees can access easily, such as single-flower kinds. Grow a variety of plants for as long as possible throughout the year to give a succession of flowers. Herbs such as marjoram, chives, sage and thyme are brilliant to start off with.

Support the British honey bee by purchasing the products of its efforts: buying honey produced near you is an easy and tasty way to aid the British honey bee. You’ll see all of the different hues that honey can take, from dark green and rich gold to almost pure white. It may also be a good excuse to pick up additional items like honey beer, beeswax candles, or sweet-scented soaps and balms.

The ‘waggle dance’ is a honeybee move. It’s not a real dance, but rather a clever method of communicating with their nestmates about the best food source by using it. Decoding the waggle dance took Sussex University researchers two years to come to that conclusion.

5. When The Queen Dies

The workers in a honeybee hive can generate a new queen bee if the queen bee dies. They accomplish this by selecting a young larva and feeding it ‘royal jelly,’ which causes it to develop into a fertile queen.

The buff-tailed bumblebee has a brain the size of a poppy seed. Given that scientists have been able to teach them to score a goal in “bee football” in exchange for a sweet treat, is truly remarkable.

Animal pollination is important for the reproduction of over 90% of wild plants and about 75% of major global crops. One out of every three bites of food we eat is dependent on pollinators. Crops that require pollination are five times more valuable than those that do not, according to one estimate. 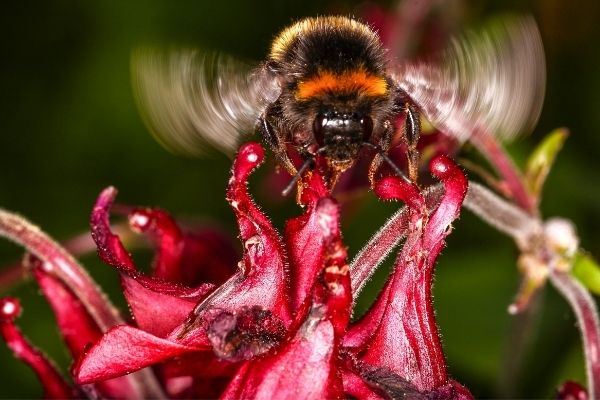 How can we help bees in the UK?

There are many ways you can help bees in the UK. You don’t need to be David Attenborough or Jeff Goldblum to lend a helping hand! Firstly:

As a final step, why not consider becoming a beekeeper yourself! Keeping bees is a fun and interesting way to learn more about these important insects. You can use your own honey as a natural remedy for allergies or simply enjoy the fruits of your labours on toast with some butter at breakfast time! We hope you have enjoyed reading this article, so let’s get together and save bees today!