Rhubarb is a fantastic ingredient that adds to the deliciousness of crumbles and pies.

Though mostly used in desserts, it’s technically a vegetable, precisely a herbaceous perennial that’s quite an easy plant to grow during winter in the UK climate. The large leaves and red stems of this plant look wonderful in the garden when cultivated with proper care.

Though the process of growing rhubarb is not as difficult as some of the other veggies, you still need to check a few things to go about it.

Starting from the best time to grow rhubarb to the different varieties available, some tips and tricks for planting and harvesting as well as some common problems and remedies can help you learn how to grow rhubarb at home.

So, if you are looking to grow rhubarb in your garden, here is how you can do it. 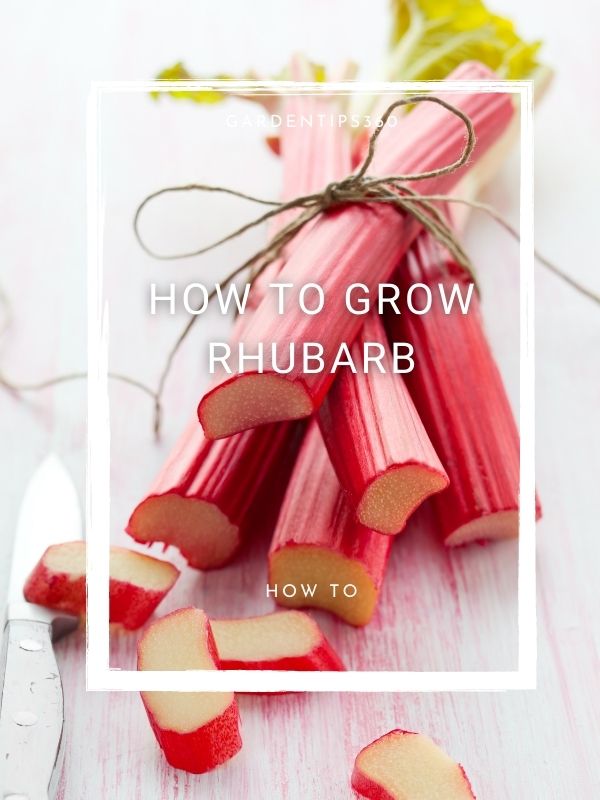 You can separate Rhubarb into two types, one with red stalks and one with green. Most of the varieties suitable to grow in the UK are red in colour that remains throughout the cooking process. The colour is purely aesthetic and has no effect on the taste.

Here are some recommended varieties of rhubarb that are suitable for growing in the UK weather.

Victoria Rhubarb is a forcing variety of Rhubarb that was developed in England in 1837. Joseph Myatt of Manor Farm in Deptford introduced it to celebrate Queen Victoria, but it became known as ‘Myatts Victoria’ and later ‘Queen Victoria.’ Two years later, came the introduction of ‘Prince Albert,’ as well as the English

Victoria Rhubarb is one of the most straightforward Rhubarbs to produce from seed, and can typically be harvested a year after planting. It creates delicious, juicy, medium-sized green stalks with greenish-red hues and green leaves.

For seed-grown, planting can be done in the fall or spring. Plants developed from seed generally take two years to produce a decent crop, however, satisfactory results may be obtained in one season in the proper environment.

Sometimes grown as an ornament, the huge leaves topped with tall stalks of white flowers with a green tinge are quite impressive.

Raspberry Red is a recent Rhubarb cultivar that produces high-quality, deep red thick stalks without the need for forcing. It is a fast cropper and has a delectably delicious flavour. It’s great for well-drained parts of the vegetable garden, and once planted, it shouldn’t be disturbed. It is fairly disease resistant and will provide many years of sweet-tasting stalks.

Rhubarb ‘Timperley Early’ is the first to mature and is commonly forced to produce delicate pink stalks as early as February. It can also be cultivated without forcing in the usual manner. This hybrid produces a moderate number of pink stems streaked with apple green.

Keeping this plant outside is a better idea and it might require a little forcing if you want to get the best results.

It’s the tiny, arrow-shaped leaves of this cultivar that set it apart. The delicious stalks, on the other hand, which appear regularly in good numbers each year, are highly prized. It is a late producer, making it ideal for forcing to produce a more readily available crop of delicate and stringless red stems. Each crown of this variety can produce up to 3 Kg of crops.

Do you want to know the different stages of planting rhubarb at home? Here, all the stages are explained in detail.

You can sow rhubarb plants either indoors or outdoors depending upon the gardening space you have. The best time to sow is early spring from March to April. If sown outdoors, the sowing site needs to be prepared by weeding and raking. After you have prepared the bed, you can sow the seeds 2.5cm deep and then once the seedlings start to grow, you need to thin out them 15cm apart.

If you are planning to sow indoors, small pots or modules are a suitable option as containers. Before sowing, you need to fill the containers with seed compost. After sowing, water the seeds well and continue to water on a regular basis. You need to transplant the small plants as they grow and the best time for that is by autumn. It will help you to secure the final position for the fully grown plants.

You can also consider planting rhubarb from the crowns, which will grow faster than the plants growing from the seeds. However, if you plant rhubarb crowns, the plants will be less variable in nature than those grown from the seeds. Growing is all about maintenance and hence, here are the multiple aspects of it explained for your better understanding:

In summer, watering needs to be more frequent if you want to provide good health to your rhubarb plant. If the weather is extremely hot, it might slow down the growth to some extent. Water thoroughly from the rhubarb stalks to the rhubarb crowns.

For providing food to your rhubarb plant, make sure you apply a good quality fertiliser. It will help you to boost the plant’s growth in summer and spring.

The soil surface needs mulching to retain its moisture level. Hence, make a garden compost out of natural ingredients. Create a layer of about 7cm of well-rotted manure around the plant without burying the crown.

Though it depends upon the cultivator, rhubarb plants usually need cold temperatures below 3°C for six to nine weeks. In autumn, the foliage naturally dies back. Right after that, you need to cut the old leaves so that the growing points can be exposed to the cold.

Every five years, you need to divide the fully grown rhubarb clumps if you spot the growth has slowed down or the plants have overcrowded. It’s the best way to secure the growth of your plants while sharing some plants with your friends. The plants that you share will produce exact clones of the parent plants.

Flower stalks are common after summer or when you feed the plants with high nitrogen. You need to remove the flower stalks so that the plant doesn’t weaken easily. Depending upon the cultivator you have, the number of flowers can vary. 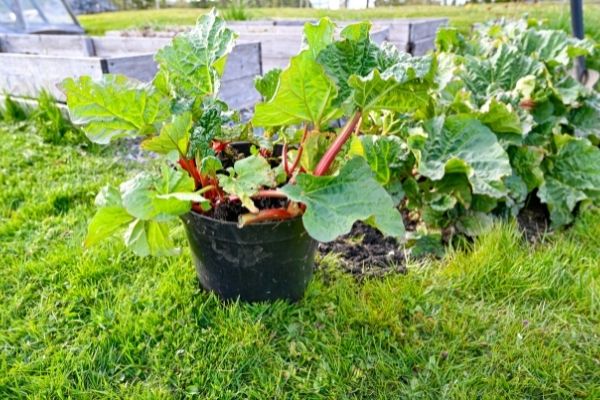 You can pick the stalks from established plants of early cultivars from March whereas April or May are the suitable months for harvesting maincrop varieties. From June onwards, it’s better to stop harvesting because that will reduce plant growth.

It’s always great t grow and harvest your own rhubarb but you need to know the ideal process of picking the rhubarb stems. The best way to do it is by holding the base of the stalk and gently loosening it from the ground. Snapping the stems off is never a good idea.

If you cover rhubarb plants with a bin or a forcing jar, you will get tender and sweeter stems in late winter. It will also help you to get fresh rhubarb crops for several weeks before they usually grow.

Slugs and snails feed on young, tender seedlings of rhubarb, which can be easily spotted around the soil, stems and leaves of the plants.

Fungi and bacteria in soil or water can cause various problems including crown or root rot. You can identify this problem by checking if the plants are looking sick and they are not growing. Crown rot can spread further causing the stems and rhubarb leaves to die.

You can use oxalic acid on the soil to prevent fungi and bacteria attack on the plant root. Another way to control this problem is by discarding the affected areas by cutting them.